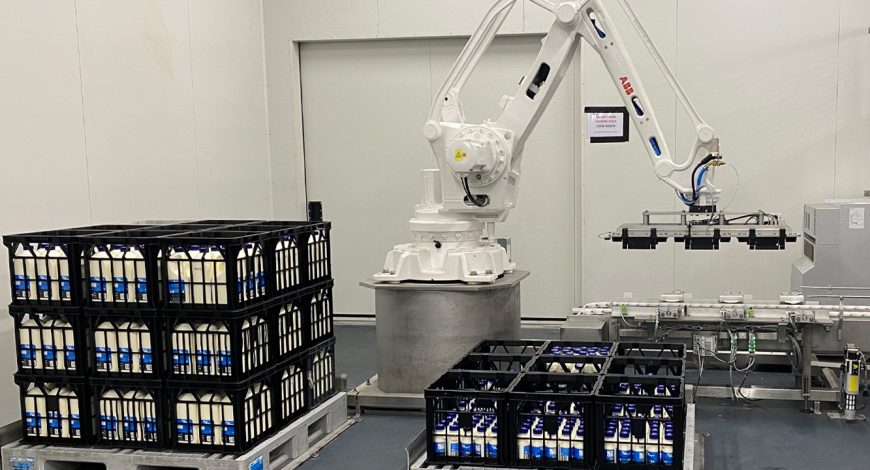 Are there robots in Myponga?

It’s like something out of the future; something the families who founded Fleurieu Milk wouldn’t have even dreamed possible during their long nights spent filling up milk bottles and screwing on caps by hand in the company’s early days.

But this state-of-the-art piece of machinery is the final piece of a $5 million, 18-month factory extension which was needed to keep up with the huge growth and demand for products Fleurieu Milk has experienced over the past few years.

So what, exactly, is it?

It’s a crate packer and palletiser, and, as you can see from the video, it’s pretty magic to watch. A robotic arm pushes 18 two-litre milk bottles at a time down a factory line, before suction heads pick them up, then lower them into crates. The crates, when full, are picked up – three at a time – and stacked safely on pallets, ready for delivery.

Built right here in South Australia and installed on site in Myponga by Adelaide-based company HMPS, the equipment can pack an astonishing 85 two-litre bottles of Fleurieu Milk per minute. A full pallet of milk – that’s 405 bottles – can be packed every six minutes.

“Previously it would take our team around 10 minutes to pack a pallet manually, and then there’d be a five-minute break to take the pallet through to the cold room,” explains Fleurieu Milk Maintenance Manager Dylan Lane.

“Now there’s a continuous flow of milk going through because the robot doesn’t stop.

For anyone worried that robots are replacing humans at Fleurieu Milk, a company which has always had a strong focus on its people, you needn’t be concerned.

“There were no redundancies as a result of our plant upgrade,” Nick confirms.

“We’ve actually just brought in a third full-time maintenance employee to work with Dylan to support the new equipment.”

The staff previously responsible for packing the pallets have gladly handballed these manual handling tasks over to the crate packer and palletiser.

“The upgrade has also given us more hours back in the day; we’re already seeing improvements in other areas,” he adds.

Staff have been freed up to work on the many other jobs, including looking at how Fleurieu Milk can continue to innovate.

“We are continuing to look at ways automation can help improve the business,” Nick says.

The team has also been busy working on new opportunities, new flavours, and new products, which is great news for customers.

Both Nick and Dylan paid tribute to the Fleurieu Milk team who have all been working long hours and going above and beyond during this period of intense growth for the company.

“The landscape of the business has changed a lot in 15 years,” Nick explains.

“Geoff’s daughter came here recently after not being here for about a year and she got lost! She couldn’t believe what she saw.

“We’ve made huge progress in the last 2-3 years and we can’t wait to enter the next phase.”

Share this post
15 years of Fleurieu Milk
Grab some milk, check in with a mate and tackle mental illness